The stupa is the oldest Buddhist religious monument and was originally only a simple mound of mud or clay to cover relics of the Buddha.  After the parinirvana of the Buddha, his remains were cremated and the ashes divided and buried under eight stupas with two further stupas encasing the urn and the embers.

Buddhist Stupas symbolize the perfect harmony of the universe. They are not just a building of cement and bricks; but also an emanation of the joy because we may be able to benefit all beings by developing compassion and wisdom.

Their live power pervade and pacify people and the land. They generate peace and love which are mentioned by every religion as the most important values.

According to the tradition Stupas bring good fortune, fulfill the wishes of people with good intentions, protect their environment. With their appearance in the world, several locations have become honoured and a travel destination of spritually open people.

For the building of a Stupa, an experienced Buddhist master is essential in every case. In Asia a number of Stupas have been built with the support of Rinpoche, in Europe the Becske Enlightenment Stupa was the first one. 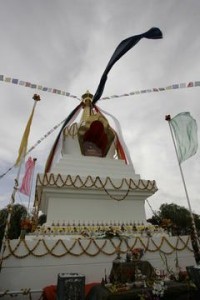 May the merits accumulated through your generosity benefit all sentient beings to be free from the sufferings of Samsara.