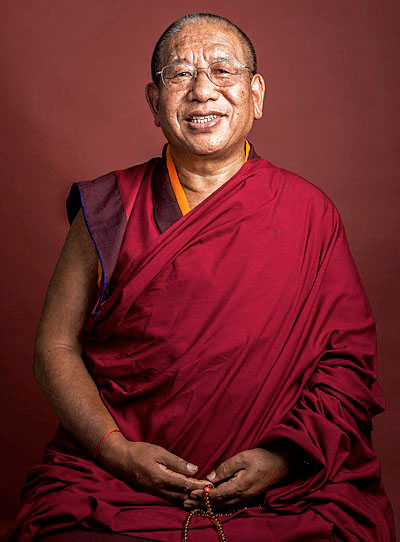 The most respected venerable Maniwa Lama Sherab Gyaltsen rinpoche was born in the year 1950 to a son of his late father Mr. Dhondup Tsering Gurung and late mother Mrs. Tsering Gurung at the village called Manang, Gandaki Zone, Nepal. His childhood name was Norbu Tsering. This birth place is located at the northern part of Nepal where we can see magnificent view of surrounding Himalayan mountain. The famous cave called Khira Gompo Dorje cave is also located here where the great yogi of Tibet, Milerapa, medidated and converted a hunter into a compassionate disciple by his precious teaching.

When a child was born, nobody knew that this child would one day serve the activity of the compassionate Buddha, Avalokiteshvara, Chenrezig in Tibetan (Buddha of Loving Eyes). It was also unknown to everyone at that time that this child could lead countless sentient beings onto the path of enlightenment through his invocation mantra, OM MANI PADME HUNG. Because of his endowed quality invoking Mani mantra for the benefit of all sentient beings, he is adorned with the title ‘Maniwa’ and is thus well recognized nowadays as Maniwa Lama Sherab Gyaltsen Rinpoche. The Title given to him is rarely found in this world because one must be able to make others to recite mani mantra more than 100,00,00,000 times (Mani Dhungyur) for this title.

From the childhood, he has been so compassionate to every living creatures and never thought of causing mischief to anyone even for a single moment. Because of the instinct that arises from his former life, he could learn easily the knowledge of writing and reading without giving much effort. When he reach two three years old, he clearly remind all the wonderful advices that he had received from his late parents. Shortly afterwards, his father passed away which make him realized that all sentient beings are not beyond the state of impermanence either they are born in the upper or lower realm of this samsara, the cyclic existence. Forcing the mind with strong attitude of disgust and renunciation, he started thinking to study and practice the pure Dharma and came to Kathmandu from where he had gradually left to Rumtek.

Firstly, he entered into the monks community of Rumtek monastery, the main seat of His Holiness the late 16th Karmapa, Rangjung Rigpe Dorje. The Karmapa gave him name Karma Sherab Gyaltsen after cutting his hair as a monk. In the presence of His Holiness and considerable number of spiritual teachers, he received the vow of a novice monk after serially receiving three words precepts, the basis of all knowledge. Successfully completed the examination and memorizing of approximately four volume of text such as Mahakala ritual, Tantras and so on starting from the prayer ritual of our Karma Kagyu tradition according to the tradition of practice lineage in a few years, he was traditionally appointed on the seat of chanting master, Omzey in Tibetan language. Thereafter, he continuously took the responsibility of Omzey. Besides, he had also studied the art of Tibetan Buddhist rituals, Torma making, drawing of various Buddhist arts and playing of all Buddhist musical instruments. Knowing that without possessing the nature of nine morality of supreme being, one can hardly do the activities of all sentient beings and Buddha Dharma, he had, thus, successfully studied the common science of knowledge like Tibetan grammar, poetry, spelling and different kinds of Tibetan handwriting from many learned scholars.

He also studied uncommon knowledge of Buddhist philosophy text such as Shantideva’s Boddhisattvacharyavatara, A guide to the Boddhisattava’s way of life, Vinaya text like Trisamvara and many other text of Sutras and Tantras as well. Understanding all word meaning of the above mentioned texts by hearing them and clarifying all misconception by contemplation, he never had the thought of attaining self-respect, pride, fame, wealth etc., rather possessing the only conduct that is related with Dharma as it has been said that, “Tameness (low profile) and peaceful state of mind is a sign of hearing”. Moreover, without forgetting the word meaning of the text on Sutra and Tantra that he had studied, he always tried to experience the real meaning of Dharma by hearing, contemplation and meditation.

Firstly, with well established foundation on hearing, contemplation and meditation, he became learned monk and never passed beyond the limit of permission and objection of the three vows. He is not adorned with any stain of faults and always give love to all irrespective of their status, high or low, and never occur in his mind like the act of harming others and bad speech. People from all walks of life admired and praised for his kind-hearted nature and he became a Eye-like model for all as saying goes like “Without making wishes, one experience the happiness”, in the Tibetan proverb. Likewise, on the annual summer retreat (Varsika), he passed his time on teaching, debate and composition in the presence of many scholars and practitioners which became a cloud of worship that makes all his spiritual teachers happy.

About his practice of view, meditation and conduct on the well-known uncommon teaching of the Nyammay Dhagpo Kagyu school.

In order to lead a meaningful life by transforming mind with renunciation from this samsara, one needs to ripen their mental continuum through empowerment for entering into the door of Vajrayana, the nearest path to enlightenment. For this practice, one needs to find a qualified lama. Karma Sherab Gyaltsen has, thus, found such a highly qualified Lamas like H.H. the late 16th Karmapa, a Vajradhara who took birth in the form of human body and H.E. the late Bokar Rinpoche. From these two spiritually qualified lamas, he received ripening empowerment, liberating teaching and supportive transmission of the old and new treasure teachings mainly the Five Great Treasure Texts and the ocean-like Tantras. He also received empowerment, transmission and explaination and specially oral transmission of the teachings of Buddha and their commentaries by Indian master-scholars etc., from many old and new scholars and practitioners. Receiving only these teaching is not satisfied, one needs to do practice on it. He, therefore, promised to enter into the three years retreat practice. Completing foundational practice for four lakhs times, he successfully did the approaching retreat of profound Tantras and took great effort until attaining his firmness on Generation and Completion stage of practice. Then, he received the complete teachings of six Yogas of Naropa, the profound method for attaining the state of Vajradhara in one life time from His Eminence Bokar rinpoche and did practice accordingly as per the level of his knowledge with strong devotion and faith by himself. After the completion of three years retreat practice, he again felt that he would pass his life only on retreat. But as per request made by the people of Manang society and the instruction given by HH the late 16th Karmapa, he had to leave for Nepal thereafter to flourish and propagate his spiritual activities. He has reconstructed the old manang monastery in Pokhara where many new monks could be ordained. He spent seven years in Pokhara. At the invitation extended by Manangi devotees in Kathmandu, he returned back to Kathmandu for taking responsibilities of Manang community monastery situated at Swayambhu.

In this monastery, he helds annually a prayer festival for reciting one billion Mani mantra (six syllable mantra of compassionate Buddha) during first month of Tibetan calendar, the very auspicious month for doing religious practice. More than 2000 devotees are regulary attending this Mani puja and the main participants are from manang devotees. Till now, 28 times have been successfully completed.

Practicing such activities is, thus, not beyond the nature of holy person. We, all the followers, wish that he being lived for hundreds of aeon and may his spiritual activities flourish in all directions for the sake of all sentient beings and Buddha Dharma. May his invocation mantra (OM MANI PADME HUNG) lead all living beings onto the path of AVALOKITESHVARA, the compassionate Buddha.